Share a memory
Obituary & Services
Tribute Wall
Read more about the life story of Paul and share your memory.

Paul Magnus Anderson, 2-year-old son of Nicholas and Stephanie Anderson, passed away in the arms of his parents on January 7, 2023, on the outdoor rooftop garden of Boston Children’s Hospital in Boston, MA.

On September 21, 2020, Paul was born in Massachusetts with Hypoplastic Left Heart Syndrome, a severe Congenital Heart Defect. Paul spent his 2 years and 3 months of life in and out of the hospital and underwent two open heart surgeries before his first birthday, and a third open heart surgery before his second birthday. It was ultimately decided that Paul would need a heart transplant, and he had been waiting inpatient at Boston Children’s Hospital since May of 2022 for a perfect donor heart. Unfortunately, his donor didn’t come in time. Although Paul spent so much time in the hospital, he always had a big smile on his face, and would overcome obstacles and complications that came up along the way.

Paul made a huge impact on thousands of people. Many had been following along his journey on social media and were cheering him on from near and far. Anyone that was lucky enough to meet him would comment on his infectious smile, his bright sparkling brown eyes, his mischievous laugh, his goofy personality, and his beautiful long hair, often referred to as his “flow”. At Boston Children’s Hospital, where Paul spent several months of his life, he made a lasting impact on everyone he met. He would have dozens of visitors stop by his room throughout the day and was often referred to as “The Mayor” of the cardiac unit because he would love to go on bike rides and wave to all of his friends in the hallways.

Paul loved reading books, especially Brown Bear, playing with puzzles, learning about animals and animal sounds, singing, dancing to music, chanting “purple!”, and watching CocoMelon and his favorite movies: Moana, Cars, Sing, Coco, Frozen, and Polar Express. He especially loved going for rides in his push-car around the hospital, and with his dog, Princess, when he was out of the hospital where he would look for flowers and birds. If you caught Paul in a goofy mood, he would sing for you and show you his “scary voice”. Paul would also never be found without his giraffe pacifier.

Paul had the most innocent soul, and always wanted to make sure that his mama, dada, and baby sister were nearby. He loved eating applesauce, smoothies, donuts, Oreos, and drinking lots of water out of his favorite sippy cup. He will be deeply missed, and the world seems a little less bright without him in it.

In lieu of flowers, donations can be made in Paul’s honor to the Paul Magnus Foundation. Our foundation was created in Paul’s honor to provide grants for housing expenses to families with children in the hospital. More information can be found at PaulMagnusFoundation.org. 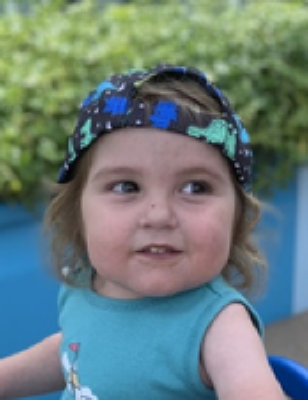