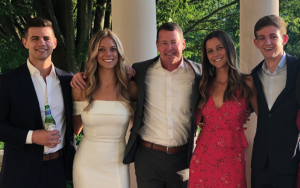 Greg Edward Wilkinson, born in Rockville, MD, peacefully passed away while surrounded by his family on September 21, 2021, at the young age of 61.  After showing an immeasurable amount of strength over years of hard-fought battles with his health, he was ready to go home to God.

Greg proudly served in the United States Marine Corps and the Army National Guard after high school.  Following his military career, Greg attended the University of Maryland, College Park, graduating with a Bachelor of Science degree in Microbiology.  He moved on to a highly successful career in Pharmaceutical Sales, where he earned countless awards and recognitions, including National Salesman of the Year.

Throughout Greg’s life, there were many things that were important to him, but his unwavering love for his family always came first.  He would say that his greatest pride and joy were his children.  It didn’t matter where he was or what he was doing; if his kids were there, he was happy.  He was one of eight children in his family and managed to maintain close friendships with all of them.  Whether they were taking trips to Bethany Beach or Deep Creek Lake, or just getting together to watch the Redskins/Terps, they always made it a priority to spend time with each other.  And although Greg already had a large family, he had a handful of childhood friends from Twinbrook who he considered to be family.

Greg’s faith was as strong as his love for his family.  He was a devoted member of the Lay Carmelites and dedicated his life to serving God.  He was an active member of St. Mary of the Mills in Laurel, MD since 1988, where he taught CCD for a number of years and served on the Parish Board.

In lieu of flowers, contributions may be made in Greg’s memory to: